A one-off Pagani Zonda is being built for an unknown, and obviously rich, American enthusiast. Know as the Pagani Zonda HH, the car will feature various bits of the best Zonda versions. There's elements of Zonda F; in the form of the carbon fibre body panels and front guard-mounted wing mirrors, and also elements of the Zonda Cinque; in the form and sound of the 7...

Here's a video we found of Horacio Pagani talking about the Zonda R Nurburgring lap time of 6 minutes 47 seconds. Interesting to note the car was run on slicks. Also, 320km/h down the main straight is quite a feat.

Here's the video that confirms Pagani Zonda R's 6:47 lap record on the Nurburgring, in case you were skeptical. Although the lap doesn't appear to be all that exciting, it is the fastest time around the world-famous track. It would be great if the guys who shot the video included an insert of the speedo reading...

It's rare to see any supercar manufacturer make an appearance during your typical television ad break, let alone a bespoke manufacturer like Pagani. Although it’s comforting to see that Pagani has pieced together this epic promo film for the Zonda R - 'just in case'.

With the Pagani Zonda coming towards the end of its life, one more limited edition is designed to give the Italian hypercar a deserving send off. The Pagani Tricolore is as limited edition as it gets, with just one vehicle ever to be made, and an expected price of US$1.75 million (AUD$1.98 million)...

Thanks to an eagle-eyed reader from South Africa, CarAdvice today have some of the first photos of the new Pagani C9 Supercar. The C9 will feature a 6.0-litre V12 Mercedes-Benz AMG engine delivering 522kW of power and 1000Nm of torque. Production is scheduled to begin later this year with the car set to retail at around €900...

Pagani has yet again redefined desire in the hypercar stakes by releasing the first official images of the Roadster version of its special edition Zonda Cinque model. Just five pristine examples of the Zonda Cinque Roadster will be hand assembled at Pagani’s Modenese Atelier, mirroring the exclusivity of the Coupe...

While most newly founded supercar firms promise greatness then recede into the pages of history, Pagani is one brand which has defied the trend, largely thanks to its ostentatious design. As a send-off to the first generation of Zonda supercars, Pagani has created the special-edition Zonda R - a car which the brand claims is 90 per cent new and completely insane... 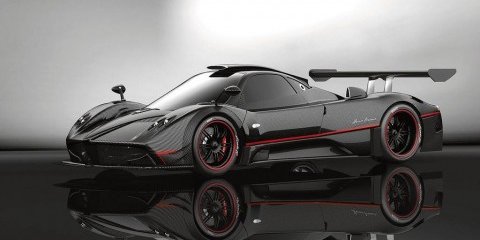 We have always been fans of the ‘last run’ models that are released by auto manufacturers prior to extinguishing the line to make way for a new model, in particular performance cars. They always seem to have all the best parts added on, and all the niggling problems experienced in earlier models weeded out... Imagine the shock on our photographers face when he pulled into a petrol station to see a priceless supercar prototype parked there with only a few small pieces of camouflage. While the badges were covered in black tape, there was no doubt we were looking at the 2010 Pagani Zonda F. Up front, this next-generation Zonda F will get an all-new front clip...