GM Holden has announced that ESP will become standard on the Commodore Range due for release in the third quarter of 2006. This is great new from Holden and brings the standards of Australian Built cars to a new level. There is no word from Ford Australia if they will follow Holden and introduce the ESP system in the Falcon range...

Holden recently hosted an event to not only show off their very succesful 6.0L Supercharged 480kw Efijy concept car but also to show it close up to cars of the Early Model Holden Club of Victoria. Unfortunately for the club members, their cars are powered by a 2.2L engine that produces a rather unsubstantial 45kw of power :)... 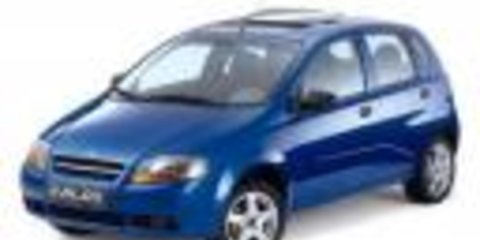 It was only a month ago I had a laugh about the Safety Rating of the Holden Barina and encouraged no one to even consider it as a car (given that it is based on the miserable Daewoo Kalos). Now it seems like Holden has had enough beating from the public about this issue and are looking at other options for their Korean made Barina...

So Holden has kept their promise and is bringing out the brand new Astra SRi. The Holden Astra SRi 2006 (AH M06) will be out later this month (June) and from the looks of it, it is still using the same engine as the old TS SRi generating peak power of 147 kilowatts at 5400rpm and peak torque of 262Nm at 4200rpm. The Astra SRi Turbo has always been a car of mystery to me...

This is what the new Astra will probably look like, thankfully its not from Korea! So you can be assured that it won't explode when you reverse into a pole. The New Astra is based on the Vauxhall Antara, which coincidently was made by former chief of design at Vauxhall, Martin Smith. I say former because he has now moved on to other things, more specifically, Ford...

There are a few cars that are synonymous with that boring, bland, fridge on wheels feel to them, but the Toyota Camry leads the race when it comes to being the most boring car in Australia.

How surprising that Holden's little Korean baby, the Barina has scored 2/5 from the Australasian New Car Assessment Program (ANCAP) . Apparently its the first time in ANCAP's history that a car model has gone backwards in ratings (the previous - European built Barina scored 4)...